This creative collaboration of The Light Surgeons(Production) and FIELD (Data Visualisation) consists of a 48 metre elliptical screen on which is displayed a large 24 hour clock: 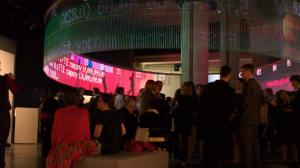 From the Museum’s web site:

LDN24 follows a 24-hour day in the life of London with hundreds of filmed sequences from across the capital – framing the city waking, working and winding down on a giant plasma screen.

An enveloping stream of 35 real-time information flows around the LED ellipse producing an ever-changing map of the city. From tidal patterns to temperatures, flight arrivals to FTSE fluctuations, RSS feeds and live links to Google searches, partner news channels and Twitter keep an ear turned to the rhythms that compose the city. Software specially developed by the design studio FIELD choreographs the rituals and movements of London and Londoners into a compelling statistical dance.

There’s a movie too.