Here are some of the 24 hour analog clocks in the UK.

This photograph of the famous clock is by Cris.

Also worth seeing is Harrison’s H1 clock, in the exhibition.

Also in London is Hampton Court Palace where you can see this astronomical clock: 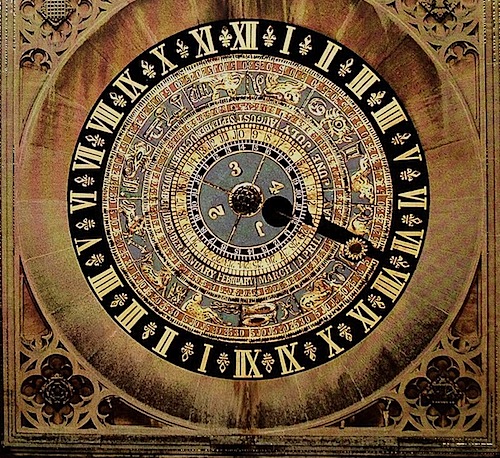 New research (outlined on the Cosmic Elk web site) has uncovered the fascinating history of this famous clock. A new book about this clock has just been published.

When in London visit the Science Museum, and the British Museum. Both have good examples of 24 hour clocks. (The Science Museum has a reproduction of the famous Dondi clock of 1364.)

This interesting 24 hour linear electromechanical analog clock is in the Picadilly Circus tube station. The horizontal band moves along from right to left, keeping pace with the sun, and showing the time at any point on the map. 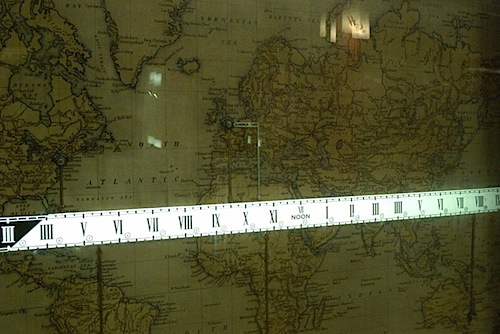 The big sundial at Tower Bridge, with the full set of 24 ‘labels’, is worth a look:

In East Anglia, visit the Whipple Science Museum in Cambridge to see two interesting replicas: the Dondi clock – again – and the clock built in 1330 at St Albans by Richard of Wallingford – complete with astrolabe on one side. These used to be in the museum in Bury St Edmunds.

This unusual 24 hour clock can be seen in King’s Lynn in Norfolk, outside St Margaret’;s church. Try and guess what it does! Clue: King’s Lynn is a sea port. Photo Colin Shewring

In Cambridge, visit the Fitzwilliam museum. There are two Tompion longcase clocks with 24 hour analog dials (the Drayton House clock and an Astrolabe clock). You can also see a decimal (10 hour dial) clock from the French Revolution, complete with a small 24 hour dial for those citizens struggling with the new decimal time system.

In the north of England, visit York Minster to see the astronomical clock. This was built after the second world war in memory of all the fallen airmen belonging to the squadrons operating out of Yorkshire, Northumberland and Durham.

The Wells Cathedral clock is one of the oldest clocks in the world. It’s been dated to 1392, although the dial was probably added many years later. The clock has been frequently updated and revised over the years, and the orginal works are now in the London Science Museum, still working (and ringing). In this photo, the time is nearly 09:42. 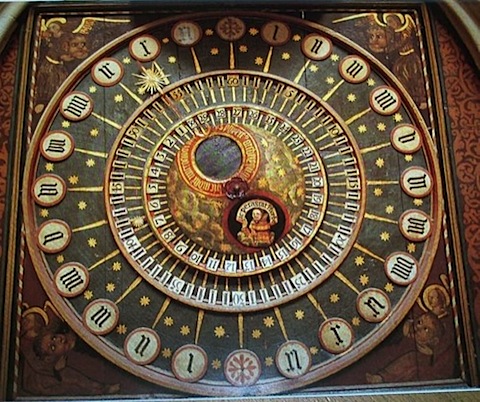 The sun on the outer dial shows the hours, in very stylish roman numerals, from I to XII, then from I to XII again. This is known as the Double-XII system, and was common in Northern Europe at the time. The minutes are indicated by a smaller star on the ring inside, and the inner ring gives the moon’s age – over 29 days in this picture. The black disk above the centre shows the moon’s phase. The inscription around the moon phase indicator says’sphericus archetypum globus hic monstrat microcosmum’ (This rounded ball displays a model of the universe in miniature). There’s also a set of figures (Jack Blandifers) which hit the bells, and a set of jousting knights who chase each other every 15 minutes. Read more at the Science Museum’s site.

The Cathedral shop sells pictures of the clock in the form of circular postcards, plastic trays, books, scarves, and paperweights. They also sell, bizarrely, cheap plastic clocks with a reproduction of the 24 hour dial but a 12 hour mechanism!

Exeter Cathedral can claim to be the location of one of the oldest clocks in the world, with a mention in the records of a horologium in 1284, and a clock in 1372. The 24 hour (double-XII) dial you can see today was probably made in about 1450, and is powered by a Victorian movement. The minutes dial on the top was added in 1759.

The sun is represented by a fleur de lys, the moon by a rotating black and white sphere (showing the phase), and the earth is at the centre, shown as a gold ball. The Latin inscription is usually translated as ‘They (the hours) perish and are reckoned to our account’. Unlike Wells and Ottery, the original works, an accumulation of many centuries of modification and improvement going back to the 15th century, have not been looked after, and are now lying on the floor, a pile of unwanted scrap metal.

The Royal Albert Memorial Museum in Exeter has the remains of the famous Exeter Clock in its collection, but not on display. This was another famous exhibition clock, designed partly to amaze and educate the paying spectators. The 24 hour dial has been preserved, but the works were damaged by bombs during the second world war. This photo was taken in 2005, before the museum was refurbished (and closed its clock gallery).

In Devon, not far from Exeter, the church at Ottery St Mary has a 24 hour clock which probably dates from around 1600, or possibly earlier, although it’s unlikely to be as old as 1340, as claimed. It probably replaced an earlier clock which wore out or became too unpredictable. 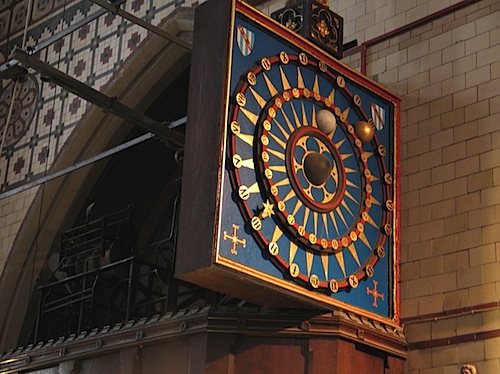 Unlike at Wells and Exeter, the Victorian replacement clock was installed in the tower to drive the external 12 hour dials, and the old clock mechanism and dial were allowed to stay in their original locations. The clock was restored in 1907 (after many years of neglect) and it continues to drive the interior 24 hour dial. It keeps good time, too. The moon is represented by a black and white sphere that rotates to show the current phase. The star indicates the moon’s age on the 30 day inner dial.

Wimborne Minster in Dorset has another old and famous 24 hour clock:

The earth is represented by a green ball, fixed at the centre. The moon revolves round this against the black night sky dotted with silver starts and also turns on its axis to mark the phases by its changing colours of silver and black. The sun tells the time by pointing to the roman numerals.

This cabinet holds the wheels and pinions that operate the sun and moon, but the timekeeping mechanism is stored up in the tower. A long shaft connects the movement with the cabinet.

Also connected with the clock in the tower is a model soldier about 5 foot tall which stands outside the tower and hits the bell every quarter.

Like most of the old English clocks, this clock is an assembly of six hundred years of craftsmanship probably built somewhere between 1500 and 1600, to replace older mechanisms which by then had already been replaced several times.