A new country like the USA won’t have many 24 hour clocks from the medieval era. However…

Apparently some branches of Kinko’s have 24 hour analog clocks on the outside. This is still a rumour – I’d love to have a picture on this site. Anyone send me one to prove it?

Perhaps we should include movies and TV shows that feature 24 hour analog clocks instead.

For starters, try spotting the 24 hour analog clocks in:

In Curitiba, Brazil, you can see this clock, apparently in the street called The Street of 24 hours. These pictures were taken by Morio, who kindly uploaded them to the Wikimedia Commons. 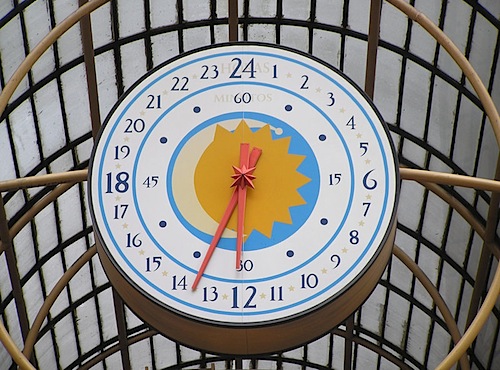 Frederic emails me to suggest that the long hand points to the hours, the short hand to the minutes. I think he’s right – the minute digits are inside rather than outside the hour digits. So this picture shows a time of about 10:00. I can’t help thinking the designers went too far by swapping the hands round, though! The convention of shorter or fatter hour hands is well-established, and – unlike the 24 hour dial itself – they cannot easily be labelled to show their different functions. They could have got away with it if the hour hand had been made thicker, perhaps.