This page lists some links to web sites where you can buy 24 hour clocks. These companies change their sites around a lot, so the links below go dead quite quickly. Let me know if you find anything else, or broken links. Also note that many firms are unwilling to ship clocks to other countries, and if they are, the shipping costs may exceed the value of the time itself.

This modestly-priced clock from Seldec Publishing is ideal for people who want to switch to 24 hour timekeeping one step at a time:

For this and other 24 hour clocks, visit Seldec Publishing.

I like the concept of Peter Stathis’ Knowhere clock, the “One World” version:

It comes with 8 blank hands and some city labels. Depending on where you live, you may have trouble finding it.

If you search eBay or Amazon for “24 hour clock” you’ll find plenty of inexpensive clocks, like this one, branded “Great Gadgets”:

Franklin Instruments might be worth trying. The version shown here is unusual in also showing metric minutes (1 hour is 100 centiminutes):

They also supply sets of 24 hour clocks (for time zone displays). However, a commenter has pointed out that their customer service is poor. Be warned!

This next clock was from the Design Boutique (http://www.designbutiken.com). Sadly they don’t seem to be selling these anymore, but you may be able to track these clocks down secondhand. 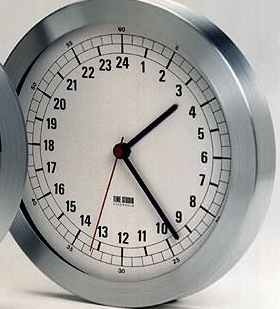 This was seen at Decoration Marine, in France. (Thanks, Francis.) It seems to have gone though.

A number of US companies sell ‘military-style’ 24 hour clocks. These usually have zeroes for the early morning hours, to accord with the 24 hour time format as used by the US military. This is a model from Benjamin Michael Industries, who appear to have gone out of business as of January 2014:

Millennium ClockWorks supply this one:

although I think they have also stopped trading.

For the astronomers, here’s an analog sidereal clock from Bryan Mumford:

This doesn’t keep 24 hour solar time like the others on this page, but follows sidereal time, the time of the stars. A sidereal day is about 4 minutes shorter than the solar day. This clock is accurate to 5 parts per million at room temperature.

The next clock is nearly a 25 hour rather than 24 hour – it’s a lunar clock rather than a solar one. Find this and some nice tide clocks at TideClocks:

This modern Roman Numeral clock quartz clock, in a silver aluminum frame, has a set of roman numerals from 1 to 24, rather than (as is more common) the arabic numbers. The appearance is similar to the Shepherd clock at Greenwich.

You can still buy these from eacombs.com, but you’ll have to email them to obtain prices.

This clock’s got four hands:

I saw this at Franklin Clocks web site. There are two hour hands, one red, one black. It will be particularly useful if you often need to know the time in two different parts of the world – perhaps the time in another office, or of a friend who lives abroad. It wouldn’t be as easy to do this with a 12 hour clock face. If, for example, the black hand was pointing to 8 on a 12 hour face, and the red hand pointed to 2, you couldn’t tell whether the red hand was 6 hours earlier than the black one or ahead of it.

Here are some other places where I’ve seen 24 hour clocks for sale. Be aware that these folks change their web sites often, and as a result some of these links might be broken. Try their main page if any of the following links fail:

Chicago Lighthouse – currently not sure about the status

If you want to try making your own 24 hour clocks, it’s quite easy. You can buy 24 hour quartz clock movements for about $10. You need to make and design a dial, drill a hole, insert the movement, fix the hands, and add a battery, then put the whole thing in a box. One suggestion is to get a picture frame box – the movement can be mounted at the back.

This is the first one I made:

There are many companies that sell 24 hour clock movements. Try Megaquartz, Clockworks, or klockit.com. You may need to use the word ‘military’ in your search, because one of the primary markets for these movements is the US military.

Steve made this clock: 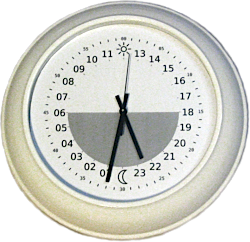 Here’s a walk-through showing how he did it.