I’ve been looking at the Zeitladen site and, being far from fluent in German, I can’t decide whether they’re selling standard 24 hour clocks and watches or sidereal (sternzeit or star time) versions.

If you watch a particular star and make a note of when it is highest in the sky (its transit time) on two successive days, you’ve measured a sidereal day. A sidereal day is about 23 hours and 56 minutes.

I presume that astronomers like to use sidereal clocks because it helps them locate stars.

What about this clock? 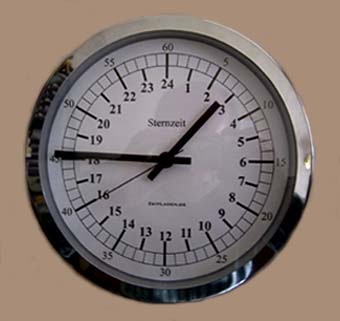 I can’t decode the German text enough to find out.

Visually there seems to be no difference between the design of the 24 hour and sidereal dials. So you would be well advised to place one of these sidereal clocks next to an ordinary 24 hour clock, or else clearly label it as sidereal. As for watches, you could wear the sidereal watch on your right wrist, the ordinary 24 hour watch on the left…

I’ve had watches and clocks that seem to gain 4 minutes a day. Perhaps they were sidereal and I didn’t know it.

The Zeitladen site was interesting, particularly if your German was good!

The site is now closed, unfortunately.