There’s a well-known observation that 50% of the human population is less than average in terms of intelligence. Statisticians argue with the precise meaning of this statement, but, as someone else observes, “it just seems that way”!

This photograph, taken by Mark Serrels, Editorial Director at CNET News, is from a story that leaps happily onto the pile of evidence in support of the statement.

Serrels’ fascinating story, The Bizarre Tale of the Australia Flat Earth Convention that Fell Apart, is about the only two people who turned up to a flat-Earth convention in Australia. It starts off being funny, but soon becomes a sad tale of mental inadequacy and self-delusion.

In this photograph it’s difficult to see whether the convention audience (all two of them) are standing in front of a clock, or just a map that looks like a clock. The numbers around the edge are arranged counter-clockwise, and I can’t see whether it starts with a zero or ends with a 24. It looks like there’s some kind of wiggly pointer aiming to 13…

I think it would make a decent clock. And I don’t think it means that it should be taken literally as a representation of our world.

Projecting a spherical object onto a 2D surface has been a familiar challenge ever since the Greek and Arab astronomers developed the astrolabe, a 2D projection of a complex 3D system, well illustrated by this diagram from Wikipedia:

Clock makers have often used 2D projections of the Earth’s surface as the background for rotating dials, although some have introduced the added complexity of rotating globes, of both the moon and the Earth.

Elsewhere on this site there’s a brief investigation of the map projections that could be used to show most of the land masses on our Earth on a flat disk, suitable for use in a 24 hour clock:

I ought to remake this image, but for now this image from Wikimedia (by RokerHRO) will have to do: 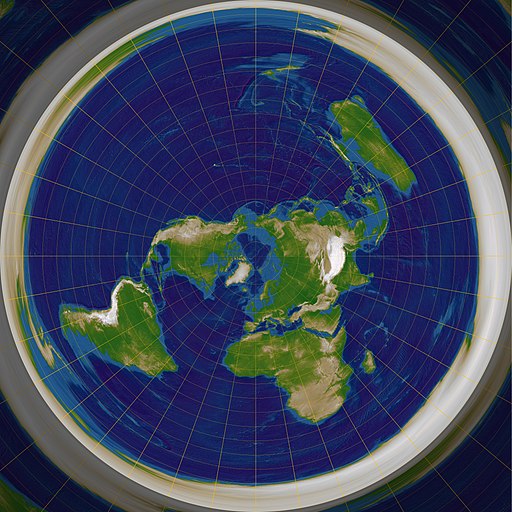 It’s surprising that anyone could mistake this geometric construction for a life-like representation of our planet!