This Vostok watch is the Neil Armstrong version of the Cosmonaut watch. 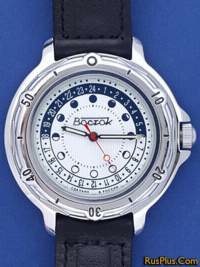 The Vostok factory have been making watches since the Great Patriotic War (what we call the Second World War), and were official suppliers to the Soviets during the Cold War period of the 1960s. It’s good to see them commemorating the first man on the moon. The Yuri Gagarin version doesn’t have a picture of the moon on it.

I saw this at rusplus.com, but you may find it elsewhere.